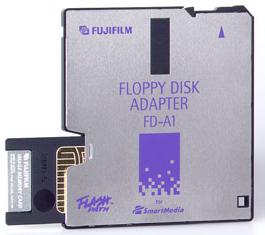 Seeing that it requires "drivers" on host PC not exactly ideal for portability. But they are, imho, ideal for "pre-USB" PC's short on free PCI card slots (for the adding of an USB PCI add-on card)

Unless your going to use a "parallel port" connecting external hard drive as a sneaker net drive, and that causes issues connecting to more modern PC's. USB floppy drives are common (as are memory card readers/writers) for a current PC.

An USB memory card reader/writer on your modern PC and your old 386 has a 3.5 inch floppy drive, will allow you to "share" via a 2gb (2000mb) floppy drive (a 2gb SD card in a floppy diskette adapter)

FlashPath (FlashPath Floppy Disk Adapter) were a series of devices produced by SmartDisk that allowed a variety of memory cards to be used in a 3.5" Floppy disk drive. The initial version introduced in May 1998 allowed SmartMedia cards to be used with a floppy drive. Later, Memory Stick and Secure Digital/Multi Media Card versions were made as well. FlashPath adapters were sold both branded by SmartDisk, and as OEM devices under other brand names.

FlashPath is hardware compatible with all standard 3.5" High-Density Floppy disk drives, but is not a drop-in replacement for real floppy disks. A special software device driver must be installed on the computer that is to access data via FlashPath. Thus, FlashPath is only usable with computers and operating systems for which such a driver exists and can be installed.

Select which cookies to opt-in to via the checkboxes below; our website uses cookies to examine site traffic and user activity while on our site, for marketing, and to provide social media functionality. More details...